Gold kosher slivovitz is a unique beverage that originated from traditional production methods in conjunction with the stringent rules of representatives of the American Orthodox Union. For this masterpiece, RUDOLF JELINEK allows an extra five years for aging, thereby achieving the highest possible quality fruit distillate.

Gold kosher slivovitz is a distillate which has been aged for five years in oak barrels. As it ages in the barrels it gets its distinctive colour and aroma reminiscent of cognac or brandy, while still retaining its typically fruity flavour which is enriched with woody undertones. Gold slivovitz achieves these unique properties thanks to procedures which were implemented by the Jelinek brothers. It has been produced according to the original recipe since 1934, when it was introduced for export to the United States. We have guarded this tradition for you for many decades.

In the production of the kosher variety of gold slivovitz, the entire production process is supervised by a representative of the American Orthodox Union. The exclusivity of this spirit is underlined by its luxury packaging.

For the full development of aroma and flavour, we recommend consuming slivovitz at room temperature.

If you are an fan of traditional slivovitz, we have these alternatives for you, classic slivovitz or silver kosher slivovitz. 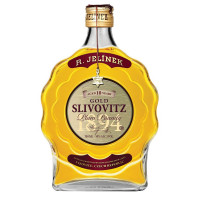