L'Ancienne is the most ambitious absinthe in modern times. It was created with the desire to offer absintheurs an experience comparable to drinking 100-year-old absinthe from the pre-ban era.

Pre-ban absinthes are those that existed before 1915, prior to the general prohibition on production and sales and which nowadays are the unsurpassed standard of quality, mainly because of their amazing room-filling aroma, creamy mouthfeel and complex taste. Bottles from this period are very rare and prices hover around 4,000 euros.

L'Ancienne (a French term evoking age and venerability, pronounced "lawn-see-en") is the result of years of research and experimentation with old distillation techniques and long-forgotten herbs. Because of its extreme complexity and expensive raw materials, only a few liters (less than 100) are produced each year.

The base consists of our finest wine distillate, to which is added the exquisite wormwood grown in Pontarlier, fennel from Provence, anise from Egypt and other aromatic herbs grown by us. Thanks to these herbs the absinthe has a milky consistency and an exceptional flavor in which you can notice the scent of leather, smoke and well-aged alcohol.

L'Ancienne has been made with the cooperation of Stefano Rossoni, Italian distiller who first entered the absinthe world with his amazing absinthe L'Italienne.

First batch sold out within a week and garnered a passionate response among absintheurs and from the world's largest absinthe-dedicated website, The Wormwood Society, which rated it among the world's best brands. The resident reviews' editor wrote that L'Ancienne is “Scarily similar to pre-ban.” Absinthe was also noticed by the magazine Wizz Air (pdf), which ranked it among the very top absinthes.

Production of L’Ancienne ended in 2014. Since November 2016, it is sold in a new bottle and under the new name Justifiée & Ancienne. 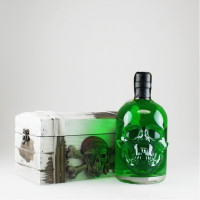 Only a buccaneer box is suitable for the skull bottle with Mephisto Absinthe! It makes a very s..